10 Brands with a Story to Tell 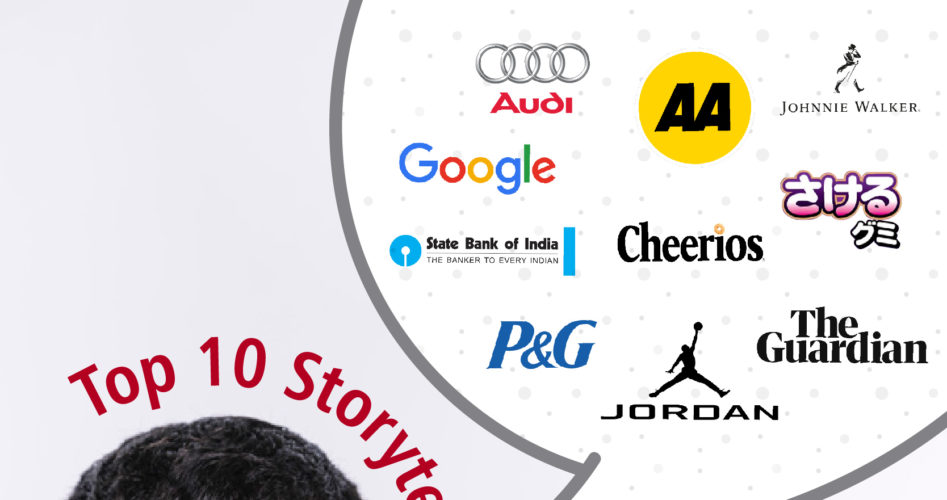 Since the dawn of time, stories have captured the human imagination, making us empathize with characters we’ve never met. In recent years, even brands have turned to storytelling to enthrall the audience and pique their curiosity. Television and other video advertisements in particular use stories to make products relevant. Here are five visual storytelling routes your brand can follow for an entertaining and engaging campaign.

If your brand is an industry old-timer, your rich history is a story just waiting to be told. Two brands that have used this to their benefit are:

Ad: The Man Who Walked Around the World

The popular whiskey brand released a video featuring scottish actor Robert Carlyle — detailing the company’s growth from homebrewed whiskey stocked in a local grocer’s to one of the most recognizable brands worldwide. A man walking a mountain path talking about Johnnie Walker doesn’t sound particularly compelling, but the carefully choreographed screenplay and symbolic cinematography make this ad shine.

Ad: We’ve Seen it All

To celebrate its 110th year, The Automobile Association released an ad that takes us on an amusing trip down memory lane, featuring their more interesting jobs — from saving a War reenactment to towing a politician in front of Whitehall. The bizarre incidents are sprinkled with that good ol’ British humor we all love; and at the very least, make you raise a bemused eyebrow.

Sticking to a Theme

Sometimes the core ideal of your brand is enough to inspire a story that resonates with your target audience. It’s easy to fall into cliché with this route, but offering a fresh and unique story like the following brands will put you a cut above the rest.

This ad gives the age-old fairytale a new twist. In it, The Guardian follows the investigation of Three Little Pigs, who are taken into custody for boiling the Big Bad Wolf alive. The unique take on a classic tale uses familiarity to engage the audience and highlight The Guardian’s promise of complete coverage. Unfortunately for these three pigs though, the story continues beyond ‘happily ever after’.

Most brands in the sporting category promote similar core values. For Jordan to stand out from the crowd, it needed a thematic variation to stick in the viewer’s mind. AKQA in China did exactly that, prompting the viewer to ask themselves — what if you couldn’t move forward unless you succeed? It goes beyond the usual montage of inspiring imagery set to a voiceover and creates an ad that could easily be mistaken for a short film.

A good story doesn’t have to be about the brand. Instead, it can highlight a feature of the product or service you offer. Ads that follow this route are a dime a dozen, but there are a few brands that masterfully craft a story that places their product as the hero.

At its core, this over-the-top, action-packed TV spot is a simple story about a beautiful car. What sets it apart from hundreds of other automobile ads is the way the story is told. We start at the aftermath of an epic battle and quickly work our way back to the start. Interestingly we don’t learn what the ad is about until the very end, when the car is finally revealed.

Here, Google tells a heartwarming story of friendship while still keeping Google features front and center. The seamless integration of its services serve to enhance the story without seeming out of place.

Sometimes the trick to making a story relevant to the viewer is to draw on current events. Amul ads are a classic example of this, but there are other brands that have used this strategy successfully too.

Can a cereal company put out a heartwarming, topical commercial in 30 seconds? Cheerios highlights the sacrifices many Americans make to stay employed in an unstable job market and turns them into an emotional moment between father and son. This ad shows that a poignant story doesn’t have to be longer than a few seconds.

With racial tensions in the US so high that they’re making international news, it’s not hard to see where Procter & Gamble drew their inspiration from. The ad shows black parents over the years speaking to their children about the challenges they will face. It’s the dual purpose behind this ad that really makes it stand out — telling a story that is long familiar to a sector of the audience and inspiring a change among the rest.

There are times when one ad is not enough to tell the story you want. Follow the lead of these brands and stretch your narrative across a series instead.

Japanese commercials have a reputation for being… interesting, for lack of a better term. This series of ads certainly lives up to that reputation, and has recently been doing the rounds on the internet. The secret to its success? A story which plays out like a soap opera, equal parts dramatic, cheeky, and downright hilarious.

A more subdued example is the State Bank of India’s NRI banking series. This narrative stars a young man who faces his family’s ire as he hasn’t come home in time to help with his sister’s wedding preparations. The beauty of these ads lie in their simplicity, as they pull in the viewer by presenting a familiar story.

What are your favorite examples of visual storytelling? Leave a comment and let us know!